Walter Palmer, a dentist and all-around piece of shit from Minnesota, is said to have paid $55,000 to kill a beloved 13-year-old Zimbabwean lion, nicknamed Cecil, who had been wearing a collar as a part of a long-running Oxford University research project.

Since animals cannot legally be killed within the confines of Hwange National Park, where Cecil lived with his pride, he was lured out in the middle of the night by Palmer and professional hunter Theo Bronkhorst, who later reported the incident—Bronkhorst implied that the essential mistake made was that “we did not know it was well-known lion.” Palmer shot Cecil (pictured below) with a bow and arrow, and finished the job 40 hours later with a gun. The hunters attempted to remove the lion’s collar, and he was left skinned and headless outside the park. His cubs will likely die too, when Jericho, Cecil’s successor, takes his place at the head of the pride.

Bow-and-arrow hunting is apparently on the rise in Zimbabwe, according to The Telegraph, because “it is silent and therefore those hunting illegally or unethically are not detected by the authorities.” Bronkhurst and the owner of the land on which Cecil was killed are facing criminal charges, according to a statement by Zimbabwe National Parks: “Theo Bronkhorst, a professional hunter with Bushman Safaris, is facing criminal charges for allegedly killing a collared lion on Antoinette farm in Gwayi Conservancy, Hwange district on 1 July 2015.”

“He never bothered anybody,” Johnny Rodrigues, head of Zimbabwe Conservation Task Force, told The Telegraph of Cecil. “He was one of the most beautiful animals to look at.” It’s been reported that Cecil was an especially easy target because he was relatively friendly, and comfortable around humans. A spokesman for Palmer told The Guardian that his client was “obviously quite upset over everything.”

“As far as I understand, Walter believes that he might have shot that lion that has been referred to as Cecil. What he’ll tell you is that he had the proper legal permits and he had hired several professional guides, so he’s not denying that he may be the person who shot this lion. He is a big-game hunter; he hunts the world over.”

He certainly is. As The Telegraph points out, the internet is quite rich with photographs of Palmer, who has a wife and two children, grinning with the many, many beautiful (and often endangered) animals he has butchered for sport (including a white rhino). In fact, Palmer has made an appearance in the New York Times, where he receives an apparently glowing mention:

As the 2009 season approached, Walter J. Palmer, a dentist in his late 40s from Eden Prairie, Minn., paid $45,000 for a tag at an auction to finance preservation of the elk habitat. Palmer, said to be capable of skewering a playing card from 100 yards with his compound bow, has cultivated a purist’s reputation for his disinclination to carry firearms as backup. Learning to shoot at age 5, he has slain all but one of the animals recognized by Pope and Young.

In the same piece, written in 2009, the Times also mentioned Palmer’s willingness to skirt the laws restricting his hobby:

As the season began, Palmer was completing a year of probation. In 2008, court records show, he pleaded guilty to making a false statement to federal wildlife officials concerning the exact location of the slaying of a black bear during a guided hunt in Wisconsin. In his sentencing order, prosecutors had specifically agreed that the “defendant shall be permitted to possess archery equipment for lawful sporting purposes.”

Palmer is described on his website as having “a unique talent for creating dazzling smiles that complement each individuals tooth structure, skin tone, and facial attributes.” It continues: “Dr. Palmer is married with two children. He is a North Dakotan and enjoys all outdoor activities. Anything allowing him to stay active and observe and photograph wildlife is where you will find Dr. Palmer when he not in the office.”

(CNN)Two Zimbabwean men were expected to appear in court Wednesday over the killing of Cecil the lion, one of Africa's best known big cats. But most of the attention -- and the anger -- is focused on Walter Palmer, a dentist from Minnesota whom Zimbabwean authorities say they are seeking for their investigation.

Palmer says he thought everything was above board with the lion hunt he paid to go on earlier this month.

But the lion that he and his local guides hunted down and killed wasn't just any big cat, according to Zimbabwean officials.

It was Cecil, a beloved resident of Hwange National Park and a major tourist draw for Zimbabwe.

The 13-year-old black mane lion suffered a slow and painful death, according to the Zimbabwe Conservation Task Force.

The hunters lured him out of the park, the conservation group said, and Palmer then shot the lion with a bow and arrow, a method he is known for. But the arrow wasn't enough to kill Cecil, who survived for another 40 hours until the hunters tracked him down and shot him with a gun. 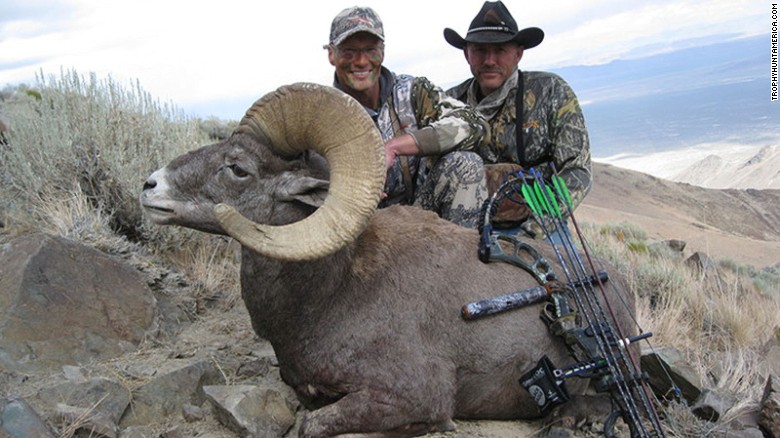 Walter James Palmer, a U.S. hunter wanted for killing Cecil the lion, seen posing (on the left) with a dead ram.

The big cat was then skinned and beheaded, and the hunters tried to destroy the GPS collar that Cecil was wearing as part of research backed by Oxford University, the group said.

"I had no idea that the lion I took was a known, local favorite, was collared and part of a study until the end of the hunt," Palmer said in a statement issued Tuesday. "I relied on the expertise of my local professional guides to ensure a legal hunt."

His apparent role in Cecil's demise has brought a huge wave of online anger crashing down on him.

The Yelp page for his dental practice in Bloomington, Minnesota, was inundated with bad reviews posted by people upset over his lion hunting rather than his root canal work.

"Shame on you, killing a majestic creature," wrote a user by the name of Charmie P.

The website for Palmer's business, River Bluff Dental, appeared to have been taken down.

A torrent of outrage flowed on social media, with celebrities like Sharon Osbourne lambasting the dentist.

"I hope that #WalterPalmer loses his home, his practice his money," Osbourne tweeted. "He has already lost his soul."

The two Zimbabweans arrested over the killing of Cecil were Theo Bronchorst, a professional hunter, and Honest Trymore Ndlovu, a land owner, according to a statement from the Zimbabwe Parks and Wildlife Management Authority and Safari Operators Association of Zimbabwe.

Investigations suggest the killing of Cecil was illegal because the land owner "was not allocated a lion on his hunting quota for 2015," the statement said.

"All persons implicated in this case are due to appear in court facing poaching charges," it said.

The dentist said in his statement that no authorities in Zimbabwe or the United States had contacted him but that he would assist them in any inquiries.

"I deeply regret that my pursuit of an activity I love and practice responsibly and legally resulted in the taking of this lion," Palmer said.

Dentist's enthusiasm for hunting with bow and arrow

But Cecil's killing doesn't appear to be the first time Palmer has got into trouble while hunting.

A man by the same name and age, and from the same town, illegally killed a black bear in Wisconsin several years ago, according to court documents.

That individual pleaded guilty to knowingly making false statements to the U.S. Fish and Wildlife Service, and was sentenced to one year on probation and ordered to pay a fine of nearly $3,000, records show.

A New York Times article in 2009 that profiled Palmer and his hunting methods said that he had served a year of probation over the false statements case. 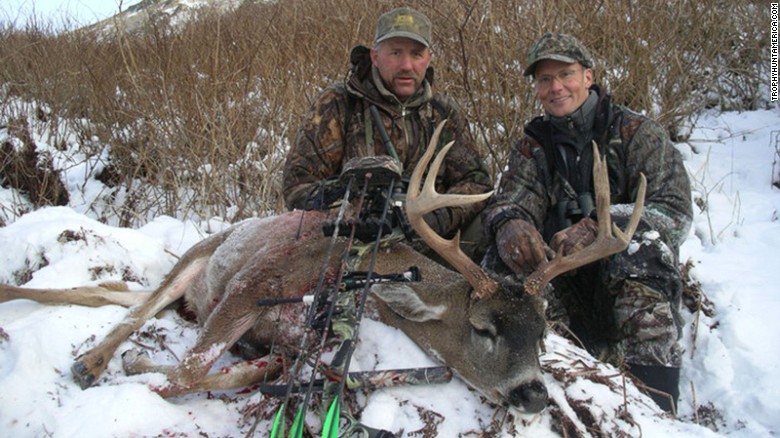 The Times article detailed Palmer's skill and enthusiasm for using archery rather than firearms to slay animals.

He is "said to be capable of skewering a playing card from 100 yards with his compound bow," it said, recounting his killing of a large elk with an arrow in Northern California.

Cecil's death this month is likely to have a damaging effect on his pride, officials said.

"The saddest part of all is that, now that Cecil is dead, the next lion in the hierarchy, Jericho will most likely kill all Cecil's cubs so that he can insert his own bloodline into the females," the Zimbabwe Conservation Force said.

"This is standard procedure for lions," it warned.

Compounding the problem, "the females of the pride could die trying to defend those young," said Jeff Flocken, the North American regional director for the International Fund for Animal Welfare.

The killing of Cecil has renewed calls among activists for a ban on trophy hunting of animals like lions in Africa. 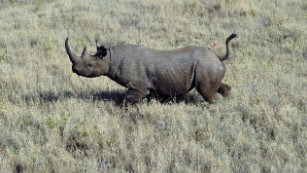 African lion populations have fallen almost 60% over the past three decades, and as few as 32,000 of them remain in the wild, according to the International Fund for Animal Welfare.

Hunters argue that by paying big bucks to hunt specific animals with authorities' permission, they can help fund the preservation of endangered species.

That's the argument put forward by Corey Knowlton, a Texan who paid $350,000 to hunt and kill a black rhino in Namibia earlier this year.

But many conservationists dispute the value of that approach.

"Studies have shown that with these big, lavish hunts, only 3% to 5% of the income from that hunt actually ends up for local people on the ground where the hunt happens," Flocken said.

"There are much better ways to earn this kind of money -- revenue from nature tourism, where the animal's not killed, brings in three to 15 times what's brought in from these trophy hunts in Africa," he told CNN.

The Oxford University researchers who have studied the lions where Cecil lived found that trophy hunting just outside the national park had "an alarming impact on lion numbers and population structure within the park."

"Each removal of a male lion by hunters on the borders of the park created a 'territorial vacuum' which drew males from further inside the protected area into boundary areas, where they too became vulnerable to hunters," the university said.

A complete moratorium on trophy hunting around the park between 2005 and 2008 coincided with a 50% increase in the lion population there, the researchers noted.

Trophy hunting restarted in 2009 but with close monitoring by the Oxford research team, Zimbabwean authorities and other groups to make sure its impact on the lion population was sustainable.

View all posts by: boss_admin